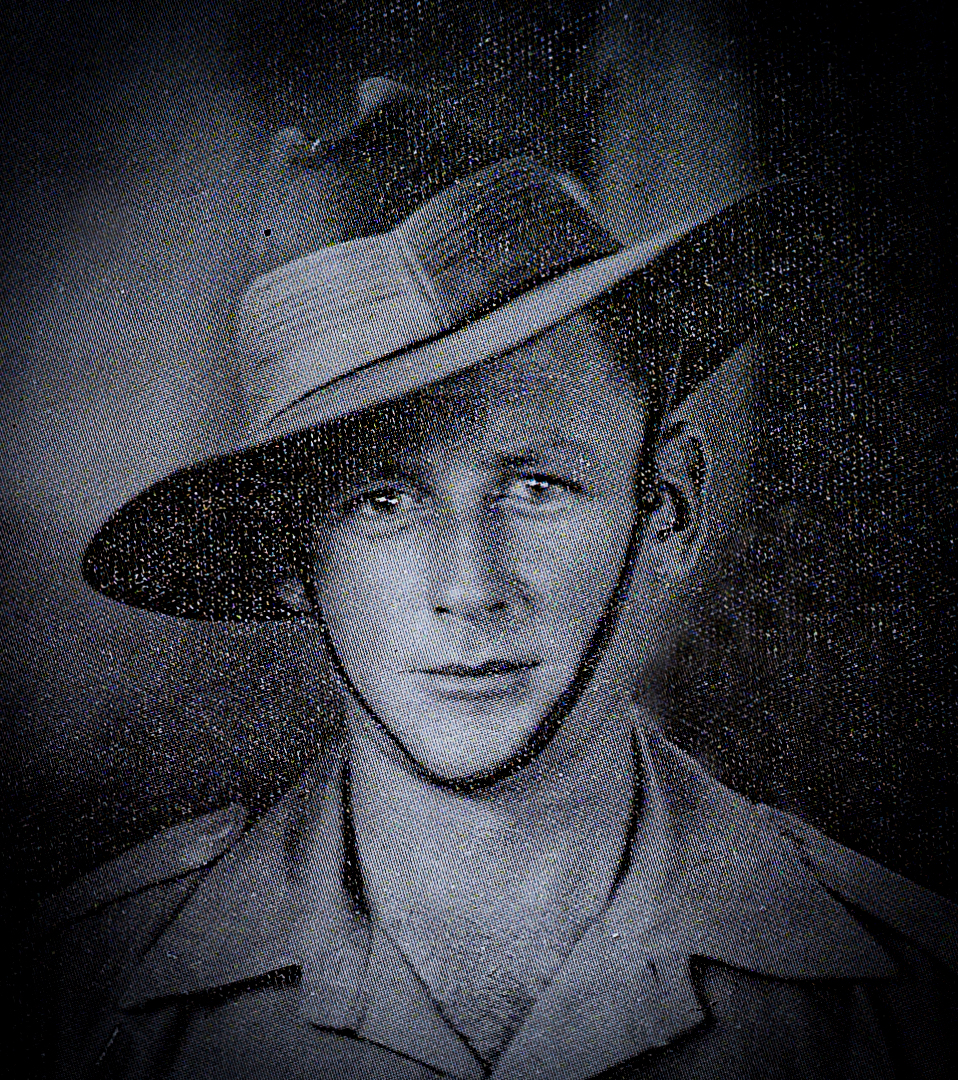 The following story of Geoff Edwards’ life and that of the creation of the Prevelly Chapel in the small town of Prevelly near Margaret River WA has been provided by his daughter, Marilyn Sadleir nee Edwards.

Of the many thousands of Australian soldiers who served in WWll, this is the story of just one very remarkable one.

It’s the story of my father Geoffrey Edwards usually known as Geoff.

Geoff was actually born in England and came to Australia with his family who were farmers at the age of 4.

They settled on the Peel estate around the Mundijong area.

WWII started on my father’s 21st birthday. As he said, “What a birthday present!”

He joined up and walked into Northam Military Camp at 11.00am on the 11th November 1939. He then travelled to the main military camp in NSW. It was on his second leave in Sydney that he met a lovely girl. She was 19, tall, dark wavy hair, blue eyes and a happy smile. From then spent every leave with her and her family and even went AWL to see her. “She never knew the amount of pack drill I did for her but she was worth it”. He didn’t see her again for 3 years and the first opportunity was when the troop train was in Sydney for half an hour. The next time he saw her he asked her to marry him. Her name was Beryl and they had a loving and sharing marriage for 54 years before she passed away.

For 7 years my father was WX778 Private EG Edwards in the city of Perth regiment the 2/llth. He served in Palestine, Egypt and Libya and then the battalion sailed for Greece, under what was at times heavy bombing.

From Piraeus the troops moved north to the foot of snow clad Mt Olympus.

In leaving Greece my father said he felt sad because the people had given their trust and friendship and he wished he could have done more. The ship sent to help was under constant air attack but headed to Crete and landed at Suda Bay. Describing the Cretans as strong and independent. My father said Churchill envisaged turning Crete into an island fortress but only a token base was established.

Although the Allied forces consisting of British, NZ and Australian, plus Greek Militia, was big it was poorly equipped with heavy guns and transport which had been left back in Greece.

Hitler used his elite Paratroop corps on Crete to make the first parachute invasion in history. The targets were 3 airstrips at Maleme, Rethymno and Heraklion on the north of the island. With the capture of Maleme airstrip the fight for Crete was lost. The Allied forces were forced to begin the long retreat to the south coast. My father said even though over 3 months he had survived some hair raising experiences and dozens of air raids with some very narrow misses, on the retreat south he had an experience that convinced him he was meant to survive the war and someone ‘up there’ was looking after him. He was in a hail of bullets on the road from the gunner in a bomber and braced his body for the impact. In that single second he thought the machine gun either jammed or the gunner ran out of ammunition. He was very fortunate but then when the troops were close to being evacuated they were trapped in a valley so the senior British officer surrended. My father was disappointed and disillusioned because if they had been told the night before, they could have slipped quietly into the mountains. However now he was a POW. Very few thought of escaping the prison camp they were on an island and where would you go. However dad’s friend Bill McCarrey was a super optimist had a plan to escape by crossing the mountains to the south coast, steal a fishing boat and sail to Egypt. My father apparently was the only one who showed interest in the plan so teamed up with Bill. All they carried were a few belongings and a tourist map of Crete. They were hardly tourists!! After their escape they met the first of many villagers who helped with bread, cheese, warm sheep’s milk, wine and tobacco for Bill. At one little village they first heard about the Preveli Monastery helping soldiers. It was the rallying point for a few hundred British, NZ and Australian soldiers. 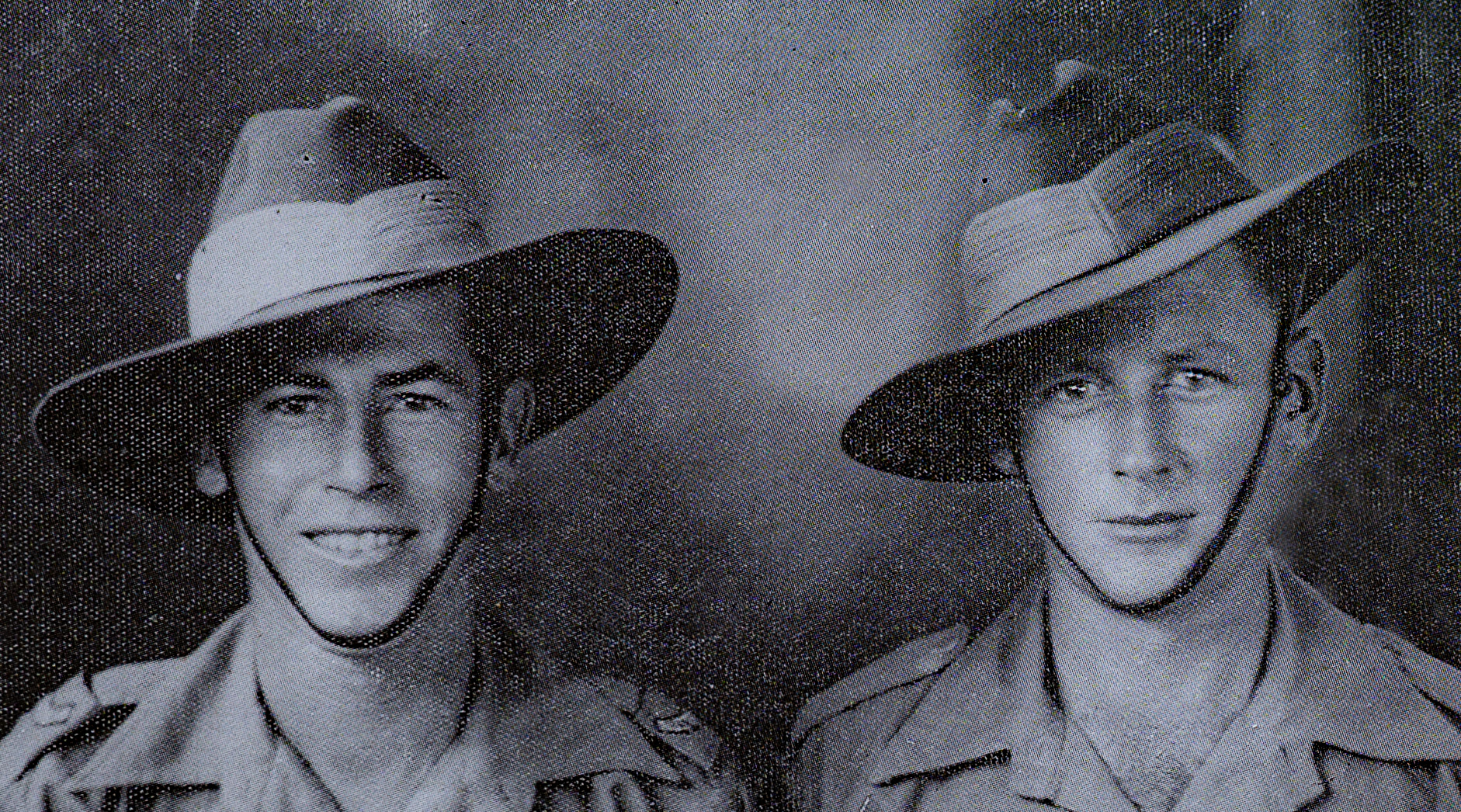 They were split into about 20 and each group was looked after by a village. It was all organized by the head Monk of the Preveli Monastery. However the Monastery itself was under constant surveillance by the Germans. The villagers also were keeping surveillance on the Germans by using school boys as runners. The villagers provided one good meal a day. The villagers also treated the sick. With his usual humour Dad said 4 thousand years and a bottle of Ouzo will beat Medicare anytime! Finally my father and Bill were in a group of 70 that assembled on the beach below the Preveli monastery to rendezvous with a British submarine the Thrasher. In the chapel near the beach lots were drawn as to who would go. The battalion was the reformed and posted to Syria, Palestine and the coast of Western Australia.

After his return to civilian life he trained as a carpenter. My mother and father discussed their future and their long term aim was to build and run a holiday resort. In the meantime he worked as a builder mainly around Scarborough was which in those days was mainly bush. My parents advertised for beach land to build their holiday resort. They settled on land at the coast of Margaret River.

They loved the sheer rugged natural beauty & thought it was magnificent. Of course there was no electricity, water, telephone and just a fishing track into it. My parents were certainly visionaries and pioneers. In just 9 years and thanks to many banks they built Prevelly Park holiday resort with cottages, caravan park and shop and subdivision. It’s interesting that the shire grader driver was German and had been one of Hitler’s paratroopers who landed on Crete. He’d been wounded but my father convinced him he hadn’t fired the shot. They became good friends.

Prevelly was named after the Preveli Monastery on Crete and many of the roads in the subdivision have Greek names-  e.g. Papadakis Way.

My father also did other building work to bring in income and with some others formed the Augusta Margaret River Tourist Bureau. It had been a terrible struggle for my parents with limited resources and being in a remote and isolated area. However my parents’ enthusiasm never waned.

After leaving Prevelly my parents moved to Perth for my schooling. They travelled to Greece and Crete and the Monastery several times and my father was always happy to be there. He would say it was good to be back and he always felt comfortable there. (Lovely Greek people) one very moving moment was back on Crete with Marcos who was a teenager during the war and had been a runner for the Australian forces and Michael Papadakis who had been a resistance leader. They drove cross the Island to the Monastery. For my father everything looked familiar.

Back in Australia my father’s mind went back to the Monks at the Monastery and he wanted to bring part of the old world to the new. This is when the idea of a chapel at Prevelly at Margaret River was formed. It would be a memorial to those who fell, honour the brave Cretans, the men and women who risked their lives helping the soldiers in their time of need and a symbol of the fight for freedom

The official opening of the chapel was 4th June 1979. There was a large crowd and it was a very emotional. Archbishop Stylianos and Bishop Ezekial blessed the chapel and the land and title deeds were handed over to the Greek Orthodox Church of Australia, My mother Beryl unveiled the plaque. The ABC made a documentary of the occasion and it was translated into Greek and shown to the Monks at the Monastery on Crete. They were very moved.

The chapel today is still magnificent. In the 2011 Margaret River bushfires the fire burnt right up to it. I’ve include photos in the 2013 reprint of “The Road to Prevelly’. I love one of the fireman’s comments when the fire stopped at the chapel, “There must be a God and he must be Greek”.

Proceeds of the book go towards maintenance and we had to replace the sign at the front which had been burnt.

My father continued to be involved with Crete. In 1984 he established a fund to help Cretans in the province of Rethymno. Money was raised from donations and ex-servicemen and invested in an annual scholarship for students.

In 1989 he published his autobiography and in 1991 donated a Memorial water Fountain in the Grounds of the Preveli Monastery on Crete. Finally in 2000 his last vision was fulfilled with a Shrine of Peace and Remembrance by including both sides who participated. It is located alongside the road to the Preveli Monastery at the edge of the hills which drop dramatically to the Libyan Sea. Around the headland is a little bay and Limni beach where Dad was rescued by the British submarine.

On the 7th April 2000 my father was awarded the OAM for services to the Hellenic community. Despite ill health which he had had for quite a long time, he attended the investiture at Government House where he received the medal from the Governor, Major General Michael Jeffery. After an amazing life Geoff Edwards passed away 4 days later.

My father was a visionary but also a doer .He used to write copious letters by hand. How he would have loved computers and being able to send emails, He might have also been on Facebook!!

He loved Greece and Crete and the people and never forgot them. 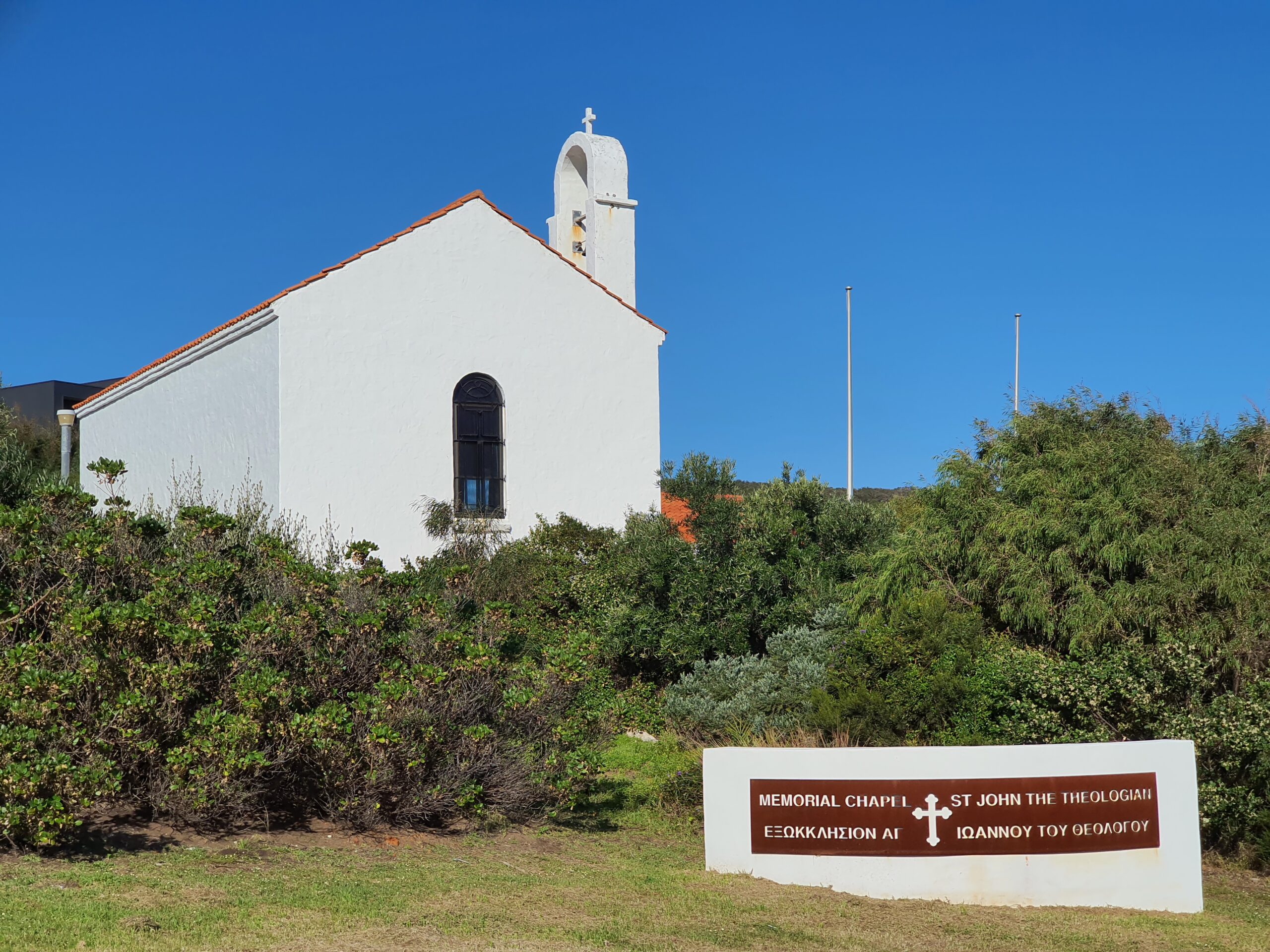 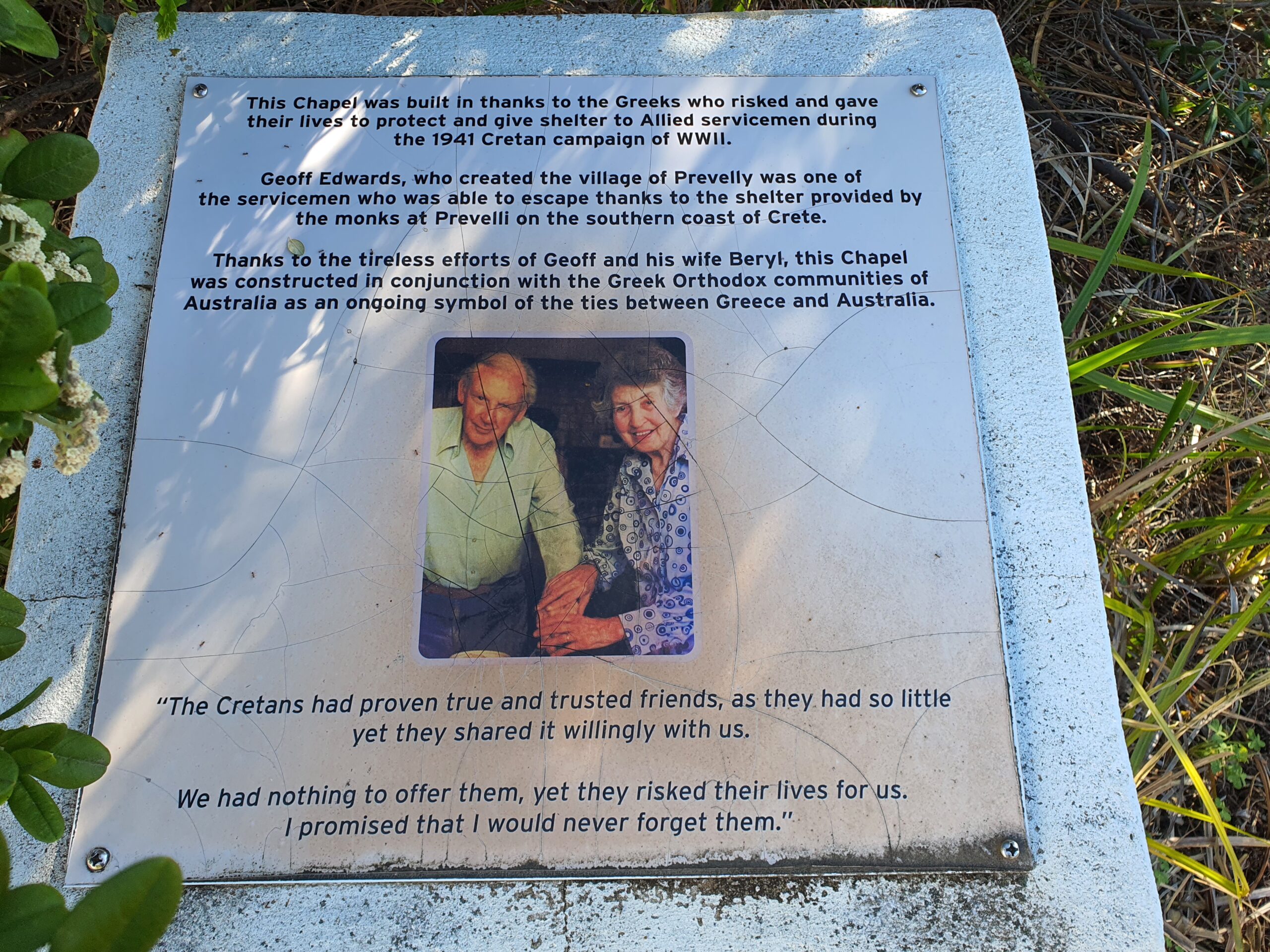 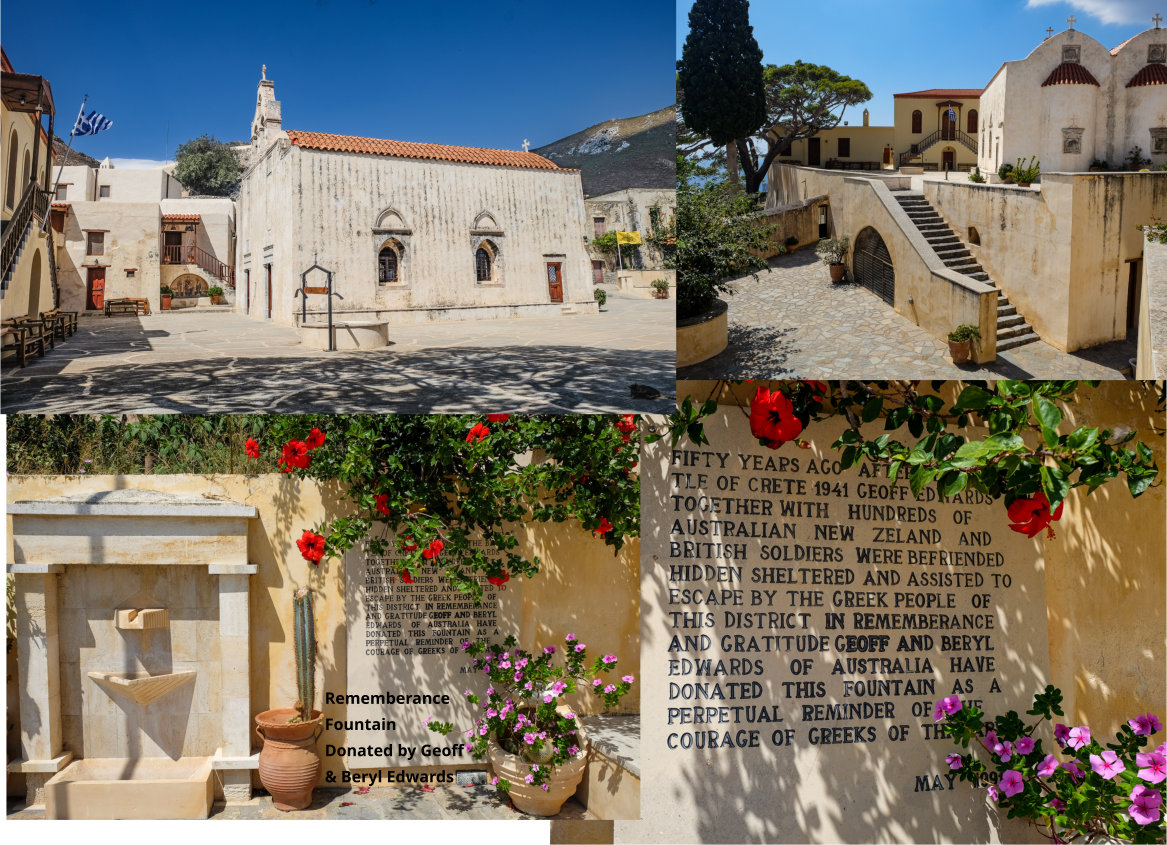 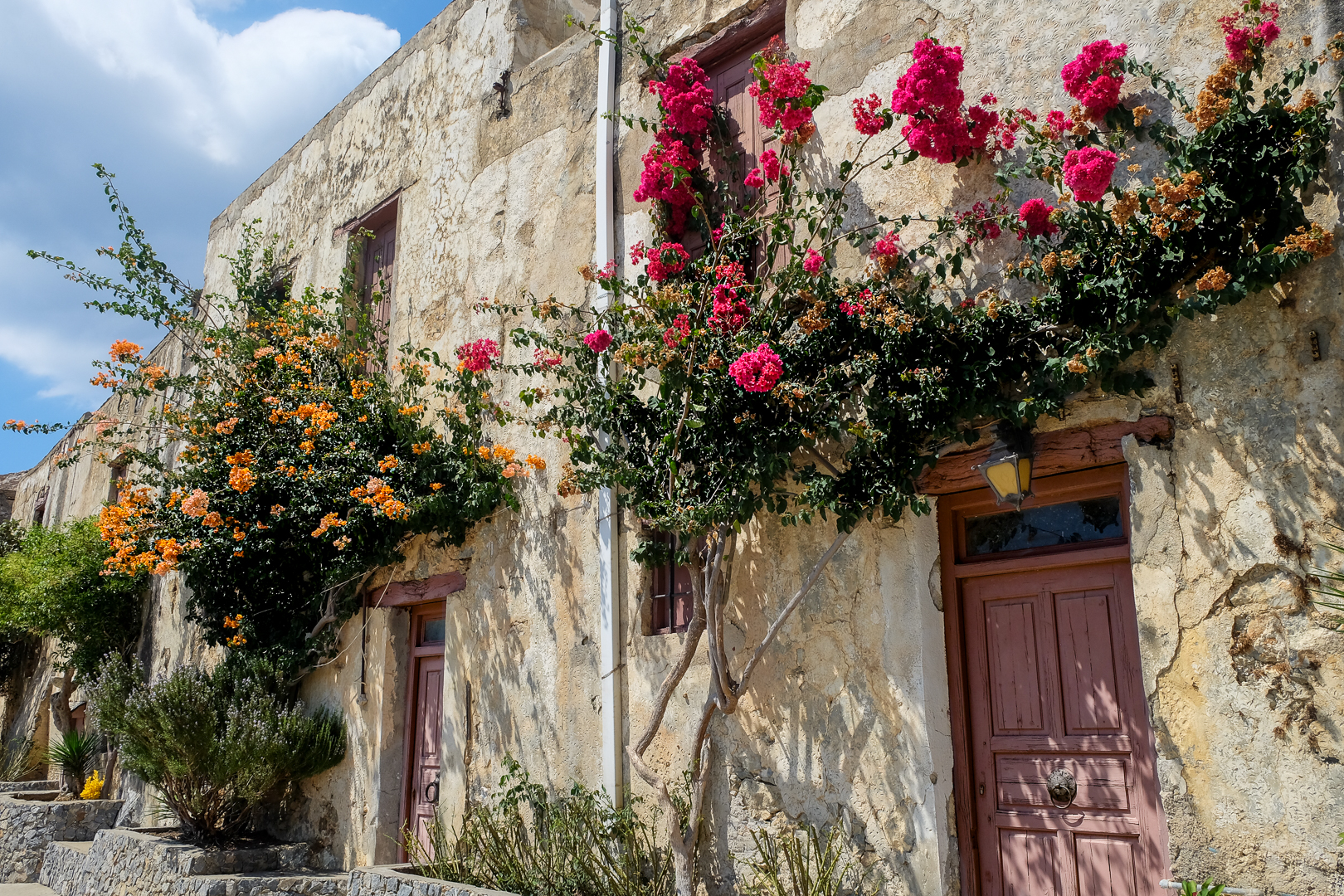 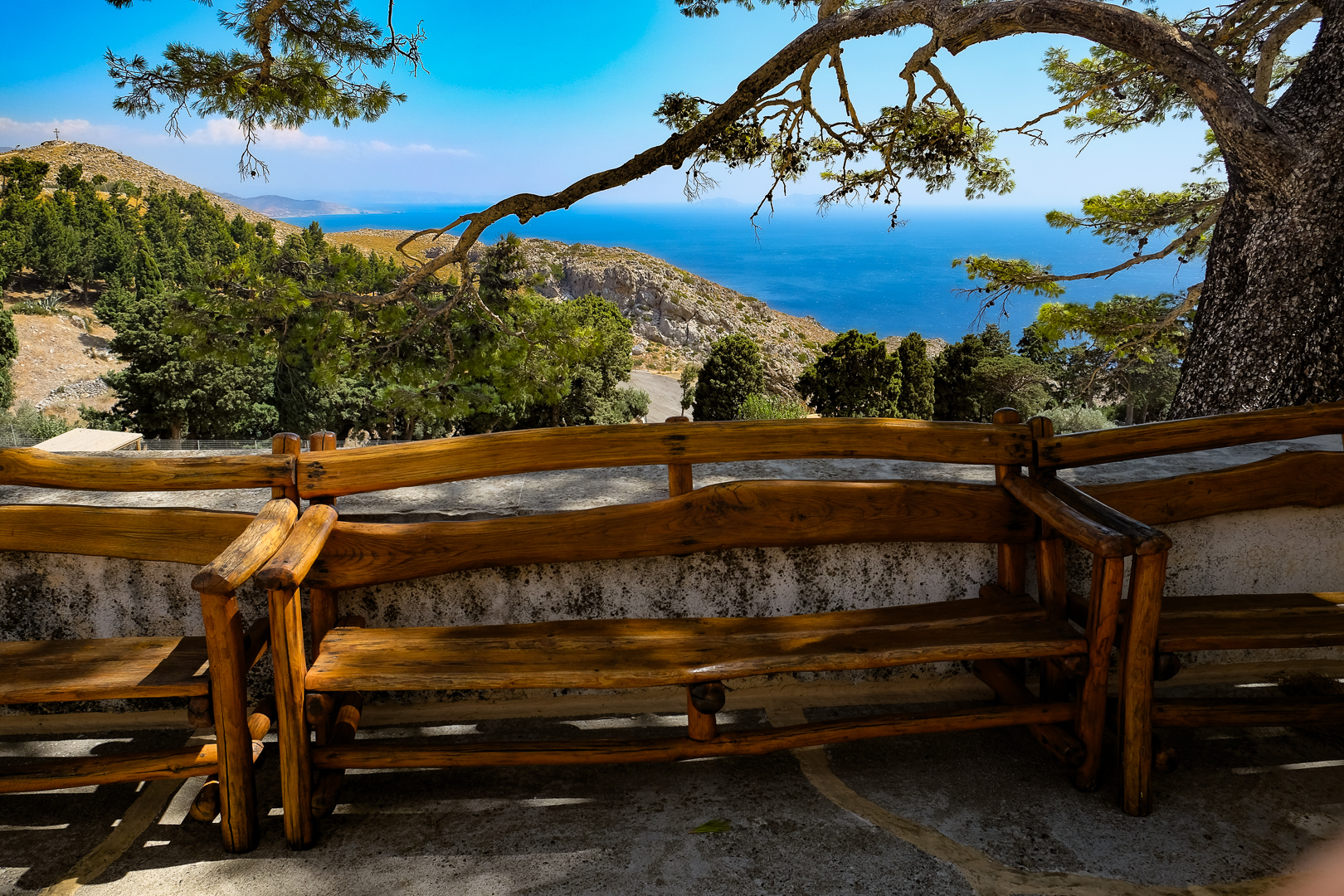